skip to main | skip to sidebar

Two excellent gigs in the last few weeks.
We were invited by a friend of ours, Rupert Preston-Bell, to perform in the National Liberal Club - it was born with political affiliation (started by Gladstone), but is now for the liberal-inclined rather than the political! - and a fine time we had too.

A great early evening concert, allowing people to get home or eat out after - a very convivial evening was had by all.  We had a splendid audience in the David Lloyd-George Room & enjoyed it all tremendously.

Then last weekend, we had a terrific trip to Bergen - our first outing to Norway.
We were part of the Festival of Song run by the Bergen Opera, and shared a concert firstly with the wonderful Janie Dee - even singing and dancing He's a Tramp with her - what a privilege; accompanied brilliantly by Stephen Higgins at the piano.
...and also in the Nachspiel after this show (this is a bonus gig event after), we sang with the brilliant Edvard Grieg Kor - singing together Richard Rodney Bennett's Fanfare.

It was an excellent trip - fantastic to work with Janie - such a star! - & also to work with teh Edvard Grieg Kor - a glorious 8-part ensemble, who sang a great Jonathan Rathbone arrangement of Yesterday quite beautifully, led by their MD & old friend, Paul Robinson.

A marvellous trip to Norway was topped off by a boat-trip around the fjords on a fabulously sunny day, piloted by another old friend (and manager of EGK) Simon Kirkbride.

And tonight we are back Live at Zédel - at the Crazy Coqs in central London - with Chris Hatt (fresh from the #Hamilton pit) and once more singing He's a Tramp with the excellent young Mhairi Angus.

Exciting times... more London dates at Zédel, the Pheasantry & The London Library and more...
Posted by markcant at 11:32 No comments:

A marvellous evening in Holt, Norfolk on a beautiful sunny day.
Very hot in our suits!
Unusually all members of the group had their family with them - what larks!

The splendid Holt Festival invited us back in year 11 - we performed in year 1 - and we sang in the Parish Church of St Andrew the Apostle, Holt.
A wonderful acoustic in which to sing, and our classical repertoire shone in there - Bach, Byrd, Henry VIII, & Anon all sounded splendid.
The jazzier stuff also worked well.  We sang Yeh, yeh - presaging the arrival on the last night of the festival of the great Georgie Fame, as well as The Singers Unlimited version of My Romance, Billy Joel's Lullabye and Anthem from Chess.

Our old friend Tony Britten had invited us the first year, and he was there again to introduce us; tho' other splendid people now run the Festival.  We were treated wonderfully.

A heavenly summer day in Norfolk, followed by an evening in the pub - what glories!

Lots to look forward to:
A rash of London gigs in the Autumn (National Liberal Club - 10th Sept., Live at Zédel and The Pheasantry - both twice), as well as a return to Bayreuth and our debut in Norway (Bergen) as guests of the Edvard Grieg Kor...
Posted by markcant at 12:45 No comments:

FEB in DE in March, then London

The good people of Fritzlar were splendid enough to provide this for us - as we know no contractual arrangement between UK & Europe is possible without a backstop - great that ours was so close, just over the road from the venue! 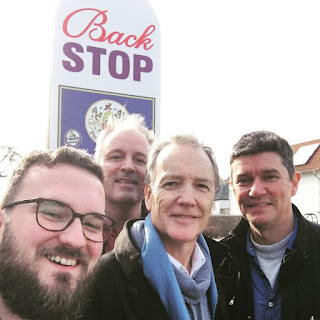 All three were a great success, and fully emotionally charged - we were of course keen to say that whatever stance anyone in the UK takes over the 'B' word, no-one wants us to be anything but friends - we definitely felt the love in the room.

We were of course treated wonderfully by all three venues as ever - great food and splendid comforts.
This was our sixth visit to Wangen - we first came in 1999 - what a great joy - wonderful to see Maria and Alfred once more - still in charge!

All in all a lovely trip around Germany on the eve of Brexit (tho' here we are still in limbo!)

We chased home for a small intimate function at The Garrick Club - very good to be inside these hallowed walls - glorious - great to support those who keep The Theatre alive and kicking in the UK.
We even sang a piece with words by Garrick himself (music by Thomas Arne) - The Beer-drinking Briton - a huge privilege.

Posted by markcant at 18:21 No comments:

Two months hence, all this seems far away!
We had a second lovely evening this year at The glorious London Library in St James' Sq. - singing at a fundraiser at the behest of our old friend Tim Rice, surrounded by a wonderful collection of writers.
On this December eve., we were joined by Rick Wakeman, doing amazing things on a keyboard whilst standing up!
Marvellous readings from Sinead Cusack & Robert Powell - a starry evening it was!

Then it was back to Belgium - Oosterzele & Nieuwpoort, for seasonal fun with the splendid Chris Hatt joining us on piano, having taken a couple of days off running Hamilton in the West End - we are honoured!

A little later, we performed in Sint Willibrorduskerk, Heusden in two beautiful evenings of christmas loveliness joined by Exsultate choir, an orchestra & Bruno Sprengers conducting.
Great to have a chance to work with larger forces; expanding our arrangements to fill the church with joy. 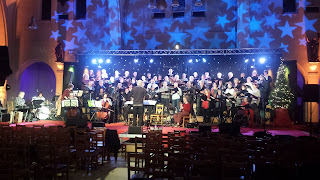 Thanks to Bruno and all the other musicians - we had an excellent three days just before Christmas.  We were homeward bound on Christmas Eve - via lovely Belgian beer on The Grand Place down in Brussels. 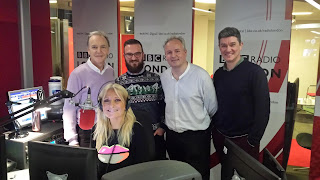 Just after we were with more showbiz royalty, Gaby Roslin on Radio London; she invited us on her show to discuss our gigs at The Pheasantry, Chelsea, once more with Chris Hatt.
As ever, a great experience, with friends old and new.

Looking forward to seeing you all again soon,

A lovely evening in Surbiton, as part of the Thames Concerts series, a long-established SW London musical tradition (nearly 60 years young!)
In the delightful surroundings of St Andrew's Church, we sang our first Christmas concert of the season, accompanied by Ben Costello on the piano, and Mike Pratt on bass guitar. 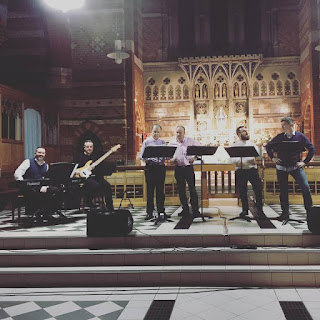 A great acoustic in which to share our music too... variety as ever... from Gaudete! to White Christmas & Greensleeves (What Child is this?) to Let it Snow; with a few non-Christmas diversions such as The Beatles, Billy Joel & German-speaking yodellers... it was all there!
Great to give Christopher Steel's Our Joyful'st Feast another airing, as these three songs deserve to be more well-known.

Mike and Ben supported us splendidly and the evening was a great success.
Thank you, Ben for the invitation - it was a huge joy.

Lovely to have Carol Jones and a great many of her friends in the audience, helping make it such a festive occasion; as well as the ever-supportive Carole Sterckx watching, and selling our stuff.

Christmas continues for us with a central London cabaret spot - invitees only, I am afraid - from thence to Belgium for concerts with Chris Hatt at the piano, and then just before the day on the 22nd & 23rd in Heusden-Zolder with choir and orchestra... hoorah!

Posted by markcant at 15:21 No comments:

We are now being joined rather more regularly on the topline by Billy Purefoy, which is a splendid idea... (his biog. is on the website, should you wish to know (a bit) more...
...my spellcheck wishes to rename him Billy putrefy, but I digress... (not a nice thought!)

First stop was at Burgwedel for a Full English Brexit - we were treated splendidly (as we were for the whole tour... great food every time!)
We are very grateful to Maggie and Julian Forsyth for helping us make our wordy FEB show more helpful to a German-speaking audience.
Including a great new song about the amount of English words in German, which the people loved... a lot!
A wonderful audience forgave our discussing Brexit, and even laughed and applauded (at apt moments).

Then it was a Madrigal to McCartney concert in Oldendorf, where we sang in a beautiful church, and were attended on by a wonderfully attentive group of people... we were lucky that they wanted their first ever concert to go very well... and we were spoilt!

We were even chalked up outside the church... 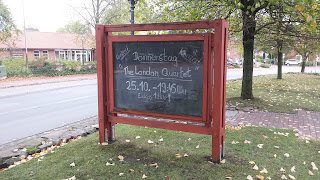 We gave the world première of our arrangement for four voices of Et Misericordiam from Bach's Magnificat - marvellous alto & tenor duet - Bill and Chris obliged, Mike sang the bass... and I did everything else!

In our hotel, we found proof of the enduring link between singers and (p)faffing about (geddit!?) 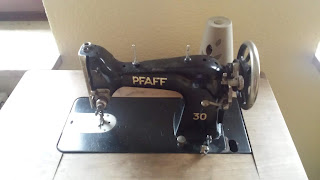 Then it was on to Frankfurt-Höchst, and back to Brexit... Our fourth visit here - they must be gluttons for punishment!
Old friends Carole & Birgit were also in attendance, splendidly & did  a very good job of selling our CDs and music-books!  Great to have them both with us. 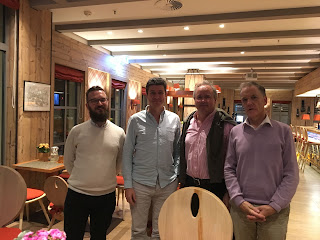 For the last night at Biberach - another FEB show - we were joined by pianist, Ben Costello - he accompanied us in some Christmas concerts in Belgium last year & we are doing another Christmas concert with him this year on December 1st, as part of Thames Concerts... a festival which Ben is the Artistic Director (do come along, if you're near London!)
Lovely to have Ben with us again.
Lovely also for the hotel bar to be open 24 hours... marvellous... German beer (and for some wine) was enjoyed immensely

We had a little snow on way back to the airport... not any problem, but this sight at alarm-clock time did feel a little concerning....! 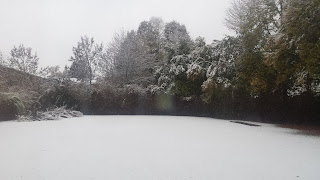 Wonderful evening in Crazy Coqs at Brasserie Zédel...
Full English Brexit had another outing and an enthusiastic crowd joined in the fun.

A delightful venue for those who do not know, and such a splendour in which to perform - Art Deco all over the show!

We were joined by old friend, Bill Purefoy on the topline...I say old friend, in fact, he was in the group 1992-3... so a wee comeback after just a quarter of a century.  Fabulous to have him back, still huge fun and of course with a beautiful voice... hoorah.
...and also we had Chris Hatt on the piano - having taken a night off from MD-ing Hamilton; lovely to see him again after a while (as he has been a busy busy boy!) & to have him accompany us with such brilliance.

Many old fiends in the audience, which obvs. was lovely; special mention to two people... my old friend Colin Warnock, who came to hear us sing one of his songs (She's Gone - with lyrics by Martin Tyrrell, mostly rewritten as They've Gone); and Lotti Viola, who came all the way from Vienna... now there's dedication!

Posted by markcant at 16:37 No comments: